11 Best Cheap Chiang Mai Hotels for Travellers on a Budget

Both modern and traditional cultures blend in harmony in Chiang Mai city. These 11 areas around Chiang Mai hotels will show you the charms of that fusion.

Of all the northern regions in Thailand, Chiang Mai is considered the most significant area due to its historical value, with tons of exciting landmarks that attracts a plethora of both locals and overseas tourists. Therefore, if you’re planning to visit Chiang Mai, prepare to book a room for several days at local Chiang Mai hotels. And best of all, prepare to experience the wonders of these 11 landmarks in Chiang Mai! 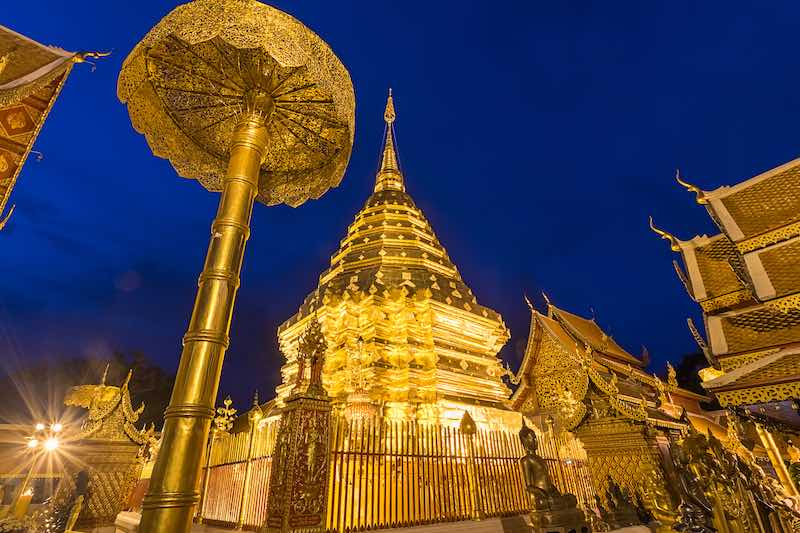 The glorious gold-and-red accent garnishes every nook and cranny of Doi Suthep, making it one of the most beautiful landmarks in Chiang Mai. Of course, the design is inspired by the Lanna Kingdom, a very significant culture for both Chiang Mai and Thailand over 700 years ago. But the golden pagoda, statues, and buildings aren’t the only landmarks it has to offer. Being a part of a large park with Doi Buakha and Doi Pui since 1981, it also offers much of the native natural beauty, such as three equally gorgeous and accessible waterfalls. And, since it’s so close to a lot of Chiang Mai hotels in the city, it's another plus point for this hotel! 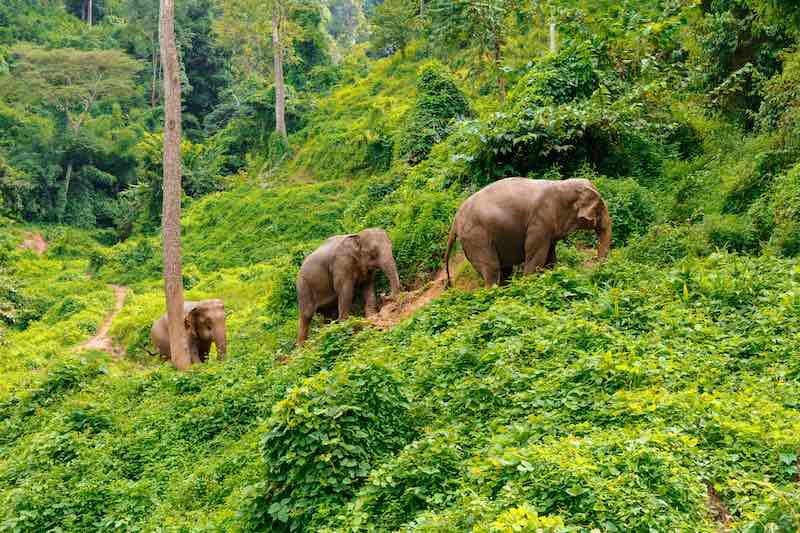 Want a different kind of safari experience? Then, visit this unique Night Safari in Chiang Mai, where three animal zones are open to visitors until midnight. Two of the zones, Savanna Safari and Predator Prowl open from 6:00pm to 11:00pm. All of them offer you the opportunity to feed wild animals, pet them, and stroll with them in their own habitats. Of course, the latter isn’t available for wild predators.

In addition to the wildlife adventure, you can also enjoy other attractions like a ‘dancing fountain’ and laser light show. However, you’d best visit this safari from the Chiang Mai hotels after sunset, as more animals will make an appearance. Also, most of the shows only start at night, hence the name of the safari. 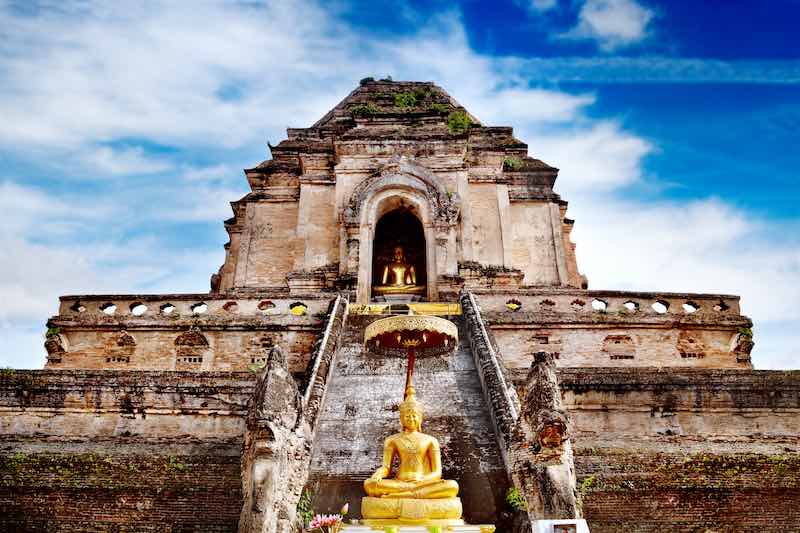 Many people agree that Old City is the most significant area in Chiang Mai, even dubbed as a ‘living museum’. Every part of the Old City feels as ancient as it is well-preserved, as well as the culture of the local's lifestyle.

Some of the more significant temples in Old City are Wat Phra Singh, Wat Chedi Luang, and Wat Phan Tao. Not only are they historically important and magnificent, but they’re also only a stone’s throw away from many Chiang Mai hotels. Heck, some of the best hotels in Chiang Mai are even situated specifically around the temples. 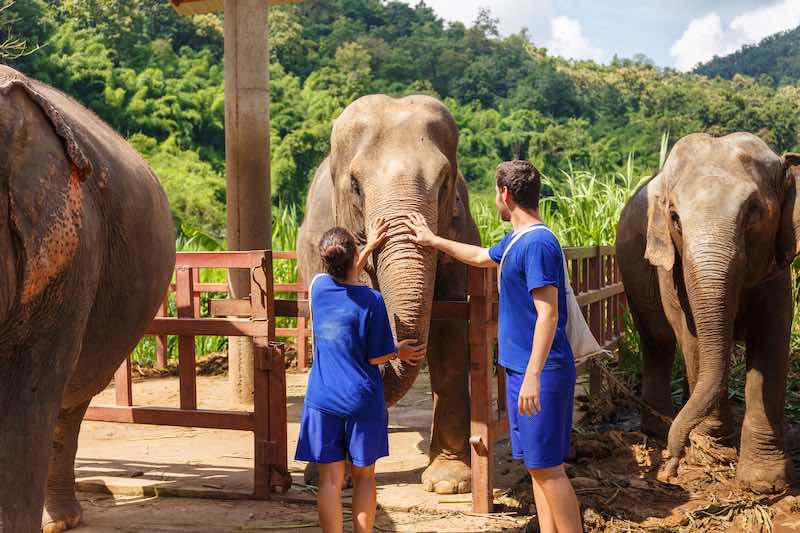 What is Thailand without elephants? This majestic mammal is considered a sacred living being by both the country and people, making the presence of an elephant sanctuary a given, especially in a place like this. Chiang Mai has one of them, which coincidentally is one of the first Thailand’s elephant-themed attractions at the time.

However, the animals are protected and preserved in their natural environment. Because of that, you’re not allowed to ride them at any cost. That being said, you can still interact with the elephants, such as bathing them, an activity very popular among tourists. 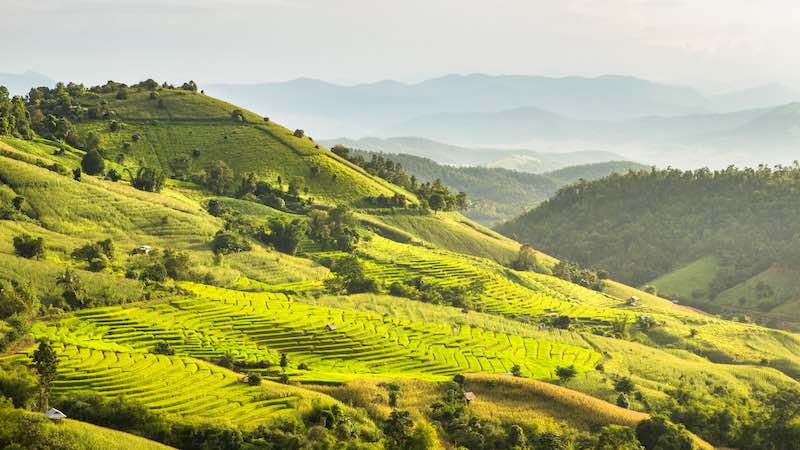 To the south of most Chiang Mai hotels lies an ancient city called Wiang Kum Kam, dubbed the underground city. This area was once the capital city of Lanna Kingdom until their conquest of Chiang Mai. After falling into disuse, the city was destroyed when the Ping River over-flooded, washing away many structures and items, where they are lost forever to history.

But even so, there are much more interesting things in the city to discover, thanks to the restoration effects. There are Mon stone tablets, Buddhist architecture and sculptures, pottery, earthenware, and more. If you feel tired, you can book a ride on a traditional horse carriage to travel around the ancient site. 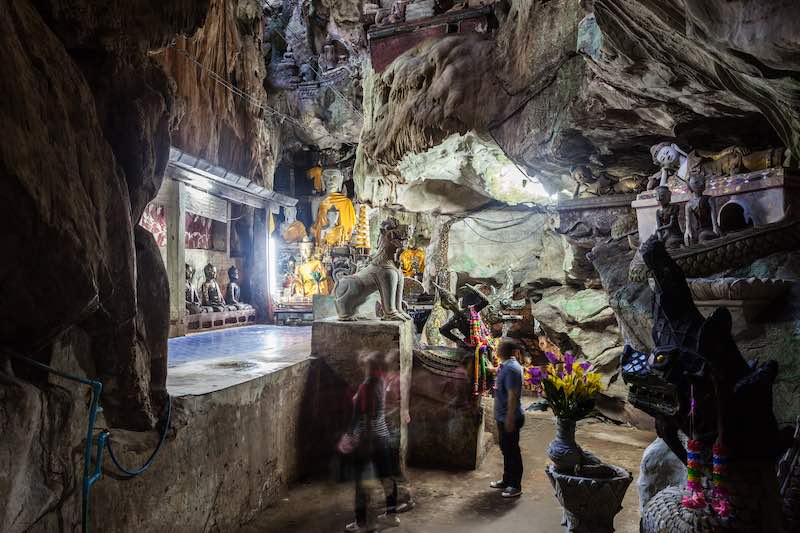 An hour away to the north from Chiang Mai hotels in the city is Chiang Dao Cave, an ancient and massive cave with a long and mysterious history. Officially, the recorded length of the cave is 12km long, connected with other smaller caves. However, others believe that the end of the cave is located in Shan State.

In addition, the climate in the caves is quite cooling, as well as the cave system designated as a Buddhist place of worship, so clothes covering the legs and arms are recommended either way. 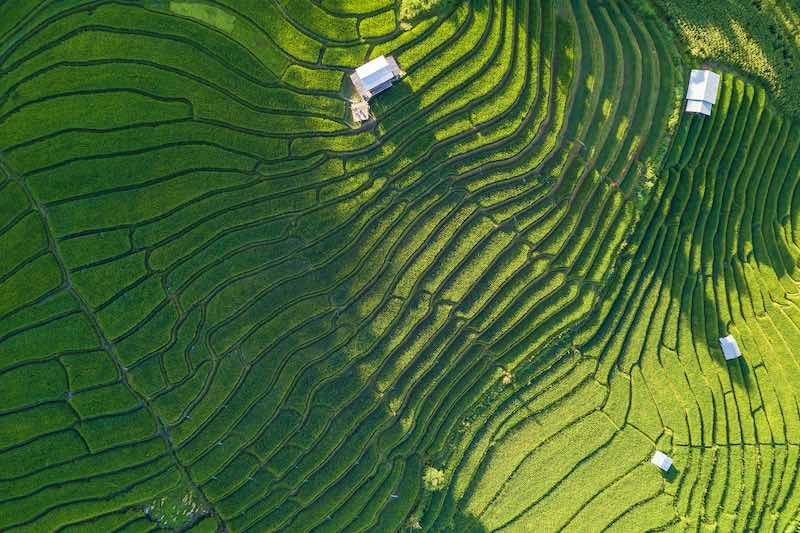 Not too far away from the cave lies another interesting landmark, only a bit closer to most Chiang Mai hotels in the city. Padung Village hosts a unique ethnic hill-tribe where all the women wear brass rings to their ankles, necks, and wrists.

Dubbed as “Long Neck Karen”, they preserve this traditional culture with the utmost respect. You can interact with them to know about their history, lifestyle, and response to modern culture. If you’re willing to support them, you can also buy their gorgeous handmade souvenirs.

One of the more remote landmarks in Chiang Mai, you’d have to travel from the local Chiang Mai hotels for up to 2 hours. But if you’re willing to expend the effort for the journey, reaching Doi Inthanon is worth it. This massive national park is the highest point in Chiang Mai, hosting beautiful natural scenery, wildlife, and garden.

Apart from that, Doi Inthanon is also home to the Northern Hill-tribes, where their closely-guarded historical lifestyle merges with modern developments. It means they allow tourists to discover and learn their cultures, while the government may use Ping River to deliver electricity to the locals. 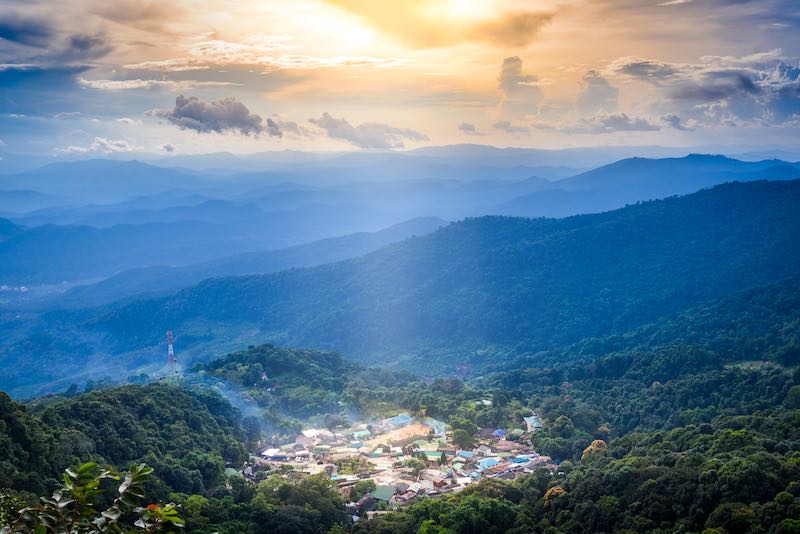 As a part of a massive park comprising of Doi Suthep and Doi Buakha, Doi Pui is the highest point of the entire territory. Here, you will find many beautiful and natural waterfalls that are easy to access, and lush natural scenery to admire.

That's not all the area has to offer: Just a bit further from Doi Pui lies a traditional Hmong Tribal Village, one of the preserved ancient cultures of Thailand. Here, the locals’ bamboo crafts, silver-embroidered costumes, and elegant musical instruments tell the tales of their ancient culture. To show your support, you can buy their handmade tribal souvenirs as well. 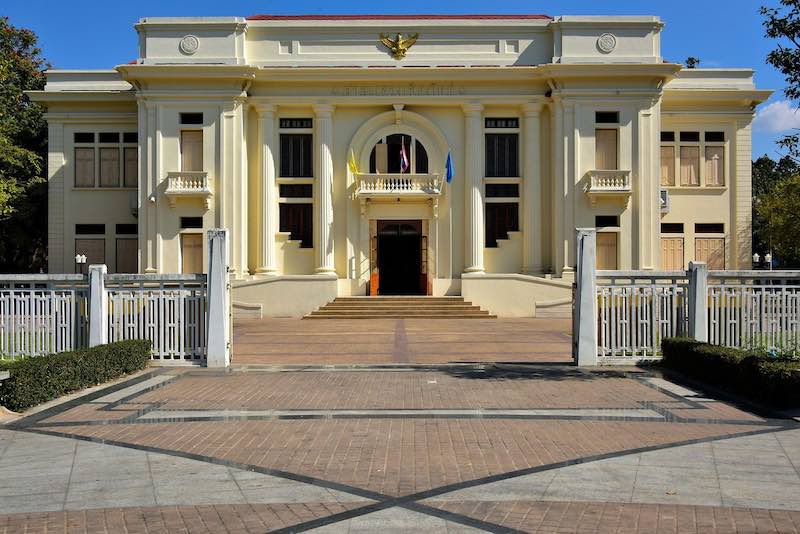 Unlike the other landmarks in Chiang Mai, Lanna Folklife Museum has a rather modern architecture with whitewashed colonial style. Nevertheless, the interior is rich in historical artefacts and stories about the glorious era of the Lanna Kingdom. The museum itself isn’t too large, and the average time of a tour around the entire building is about an hour. Most exhibits comprise of detailed scenes and stories of locals’ past domestic life, portrayed by life-sized wax dolls. Moreover, the interior’s eye-catching design making the whole area Instagrammable and popular among younger tourists. Plus, it’s close to a lot of Chiang Mai hotels. 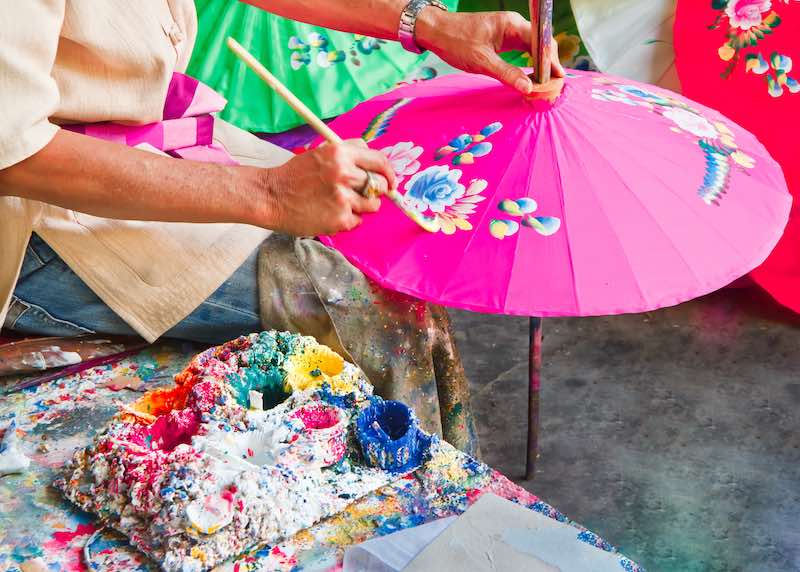 For those seeking traditional handcrafted souvenirs, Bo Sang Handicraft Village is the place to be. Umbrellas are the staple goods here, with a lot of variations available, such as large shady parasols, tiny delicate umbrellas, and hand-painted novelty umbrellas. Because of its specialising in umbrellas, the village gained much popularity overseas, and the umbrella became one of Chiang Mai’s symbols.

Of course, there are other unique handmade products you can buy here, lah. And best of all, you can bargain the price, and its location being very close to Chiang Mai hotels is also another plus point.

‘Unique’ and ‘luxurious’ is what this hotel is all about, offering both exquisite design and great comfort. Aside from having a complete set of facilities, its outdoor pool and terrace are magnificent. In addition, the hotel offers some unique facilities rarely found anywhere else: a golf course, complimentary bike rental, and an archery range.

Of course, the room quality doesn’t disappoint. Exquisitely designed with a cosy king-sized bed, and modern amenities, this is one of those Chiang Mai hotels that gets you hooked the first time.

With a perfect fusion of its colonial architecture and a riverside collection, it gives off a unique, comfortable ambience of the past. Plus, with only 19 rooms available in this 5-star Chiang Mai hotel, privacy and satisfaction is guaranteed, where you get both comfortable and quality rooms and a generous range of facilities.

There is an outdoor pool, a great restaurant, lobby bar, and the hotel’s most prized: a spa service. To conclude, this hotel is one of the best Chiang Mai hotels you’ll have to book in many days in advance.

Being based in the heart of Chiang Mai’s Night Bazaar is already a clear advantage, but this hotel has more exciting things to offer: beginning from its grand and dramatic structure, both inside and outside, blending European and Thai designs with finesse. Additionally, it has a plethora of facilities, such as swimming pool, pool bar, Jacuzzi, spa & wellness centre, gym, and sauna.

Room-wise, it is with supreme quality, comfort, and amenities. For a 5-star Chiang Mai hotel, this is certainly one of the best hotels in Chiang Mai for its sheer value-for-money.

And the bottom line is...

Packed with exciting and significant landmarks, it’s no wonder Chiang Mai is so sought-after by tourists all year round. Therefore, the next time you want to visit Thailand, Chiang Mai should be on your list. With all the amazing Chiang Mai hotels ready to accommodate you, the experience here will surely be memorable for many years to come.