The 9 Affordable and Chic Hue Hotels for a Family Vacation

11 Most Phenomenal Luxury Hue Hotels for a Honeymoon Retreat

Do you know why adventurers and history enthusiasts alike love staying in Hue Hotels? Find out the amazing historical sites that this ancient city has to offer.

Just like its neighbours, Thailand, which offers many attractive tourist destinations, Vietnam also offers many amazing places to visit and activities to do. But if Thailand is famous for its beaches, then Vietnam is famous for its historical sites. It is the perfect country to visit, especially for adventurers and history enthusiasts alike. One of the reasons is because of the abundant historical sites they can visit.

You probably know the dazzling array of beautiful temples to visit in Thailand. Meanwhile, Vietnam offers historical architecture in whole different characteristics. You can see it yourself when you stay in Hue hotels, Vietnam. Hue is known for the ancient capital city. Therefore, it is no surprise that you are going to find a lot of ancient historical and cultural sites. If you are an adventurer, history enthusiast, or just a tourist, who wants to see the wonder of ancient life, then you need to visit these 9 sites near Hue hotels Vietnam. 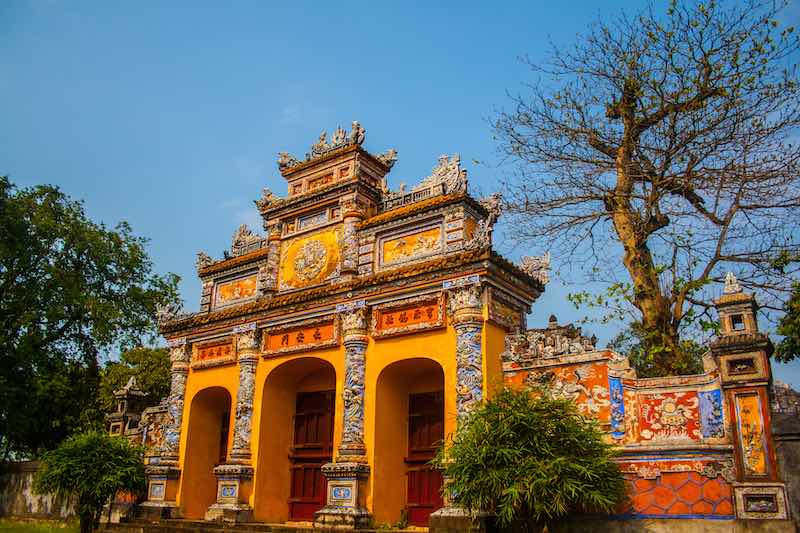 The most popular destination near Hue hotels Vietnam is the Hue Imperial City, which is also known as The Citadel. Hue Imperial City is one of the most historic buildings with a long story behind it. It was once the capital city in the Nguyen Dynasty era between 1802 to 1945. In this historical site, you will find a vast complex of historic buildings, that is because, during the Nguyen Dynasty, the Imperial City was led by 13 Kings. That is why you are going to find a lot of important buildings in this complex.

The Citadel is located near the Huong river. Just like how other old civilisation, building complex near a river means it is the centre of the community activities. It is predicted that this area was once crowded.

Due to the huge area, you will need hours to explore every corner of the Imperial City. It is doable, though, but you will need to come early to make sure you have enough time to wander around. Since Hue Imperial City is associated with ancient and historic buildings, it is enlisted to one of the World Heritage by UNESCO since 1993. 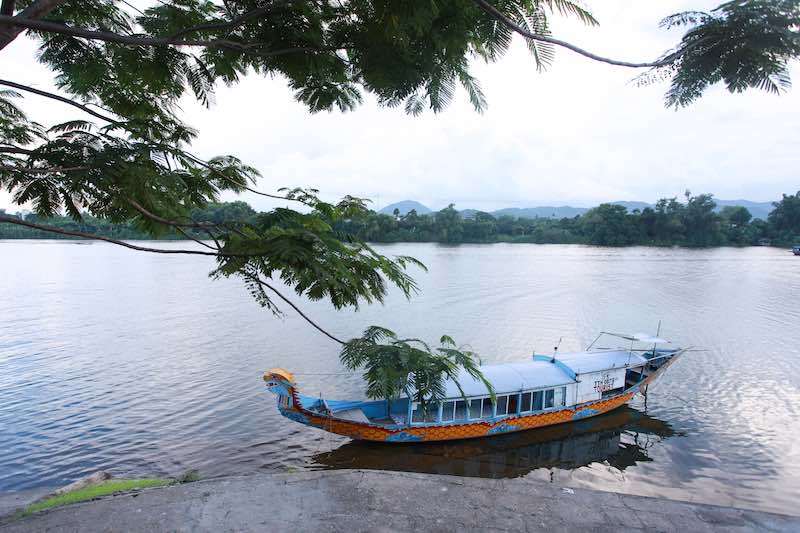 Another place that must be visited while you are staying in one of Hue hotels Vietnam is The Perfume River. The Perfume River is another name for Huong River that lies around Hue Imperial City. It is the second site you need to visit after you finished exploring the Hue Imperial City. If Bangkok has Chao Phraya, Huong River is one of the mainstays of Hue. This river is one of the best places to enjoy the beautiful sunset. Tourists will be invited to go down the river by riding a dragon boat.

Do you know why it is called The Perfume River? The answer is because during autumn, the flowers that bloom on the edge of the river emit a very fragrant aroma, which you can smell even when you are in the middle of the river. However, it is not the only reason why you should visit this river. If you choose to ride a dragon boat, you will be taken along the ancient buildings around the Huong river. Of course, it is an amazing experience to explore an ancient city. It's no wonder that many tourists choose to ride the Huong Cruise to find out the other side of Hue Imperial City. 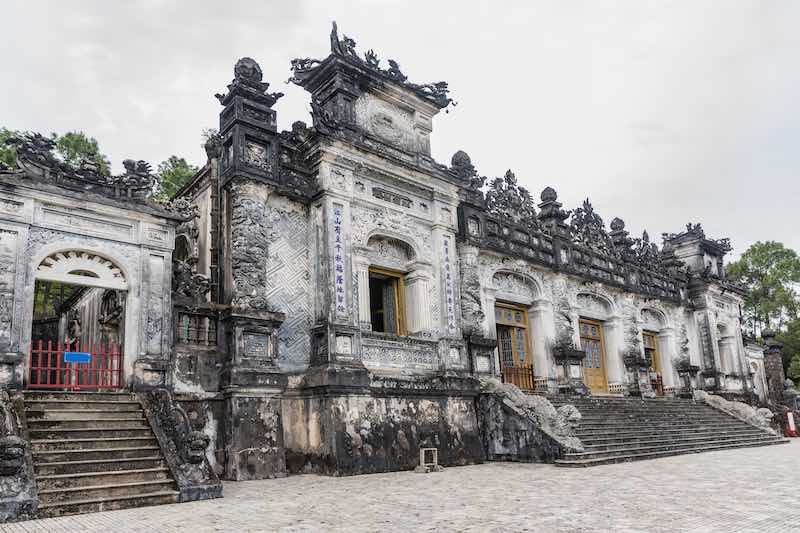 Another historical site that you shouldn’t miss during your stay in one of the cheap Hue hotels in Vietnam is the Khai Dinh Tomb. As its name suggests, this place is the final resting place of King Khai Dhin. Unsurprisingly, Khai Dhin Tomb was built with traditional Vietnamese architecture and decorated with a lot of beautiful details that show the unique Vietnamese culture.

Khai Dhin Tomb itself was a building made to honour the twelfth emperor who had led the Nguyen Dynasty. No wonder the people during that era provided the best and most beautiful design and place for Khai Dhin. Nevertheless, this complex of Khai Dhin Tomb is located a little bit far from Hue Imperial City, and it is in the Chau Chu mountainous area.

Despite being built in the mountainous area, the building has a magnificent design. It is so complex and beautiful that the construction process took 11 years to complete. By combining typical Eastern and Western architectural styles, the Khai Dhin Tomb complex shows off a stunning design. Not only using typical Vietnamese carvings in some of the details, but Khai Dhin Tomb also has a large dollop of Western-style design. 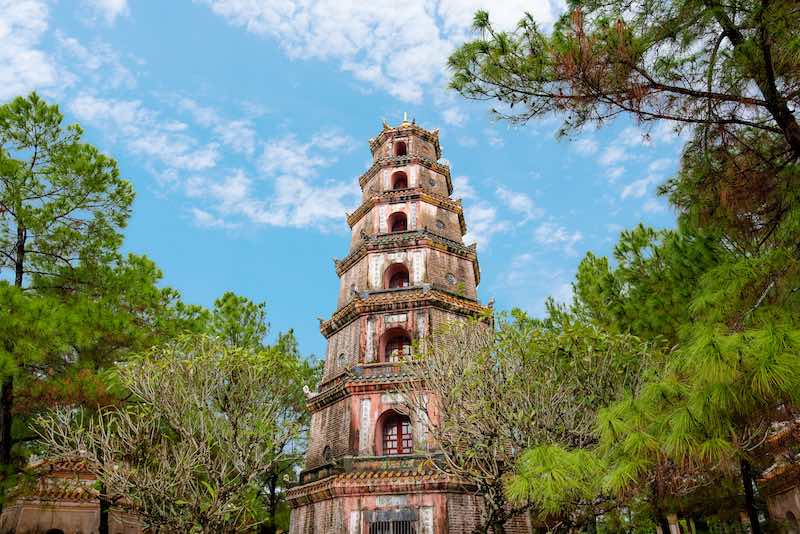 Put this destination as the first thing you will visit in the morning before everything else. That is because Thien Mu Pagoda is never empty of tourists. The pagoda is also known by the local people as The Celestial Lady Pagoda. Not only representing Buddhism which was widely adhered to by the Vietnamese during the Nguyen Dynasty, but this pagoda is also one of the symbols of the city of Hue.

Thien Mu Pagoda also has its own stories at each tier. The seven-tiered Pagoda is located around the Ha Khe hill. There is another amazing thing about Thien Mu Pagoda. It turns out that this historical place is one of the places that produce folks rhyme, which is still known and used by Vietnamese people. You can rent a boat here and ride along the Huong River to visit several other ancient buildings that lie along the Perfume River. 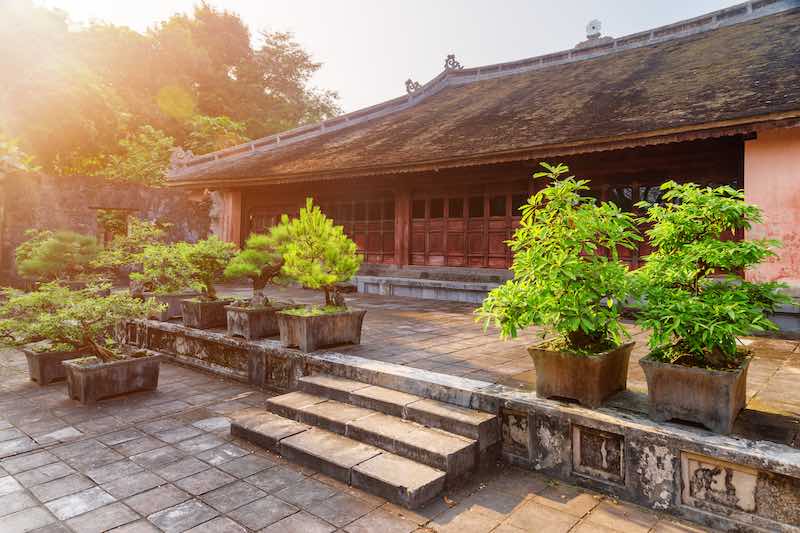 Another historic place that can be visited while staying in Hue hotel is The Tomb of Tu Duc. Just like the Khai Dhin Tomb, this place was also built to rest the body of one of the leaders of the Nguyen Dynasty who lived in the 19th century. The Tomb of Tu Duc complex is divided into two areas, namely the temple area and the tomb area.

Different from the Khai Dhin Tomb which its design was made rather complicated so that not just anyone can visit it, The Tomb of Tu Duc is accessible. Uniquely, the Tomb of Tu Duc has very amazing scenery surrounding it. A water lily pond puts a cream on top of its already beautiful decorations. 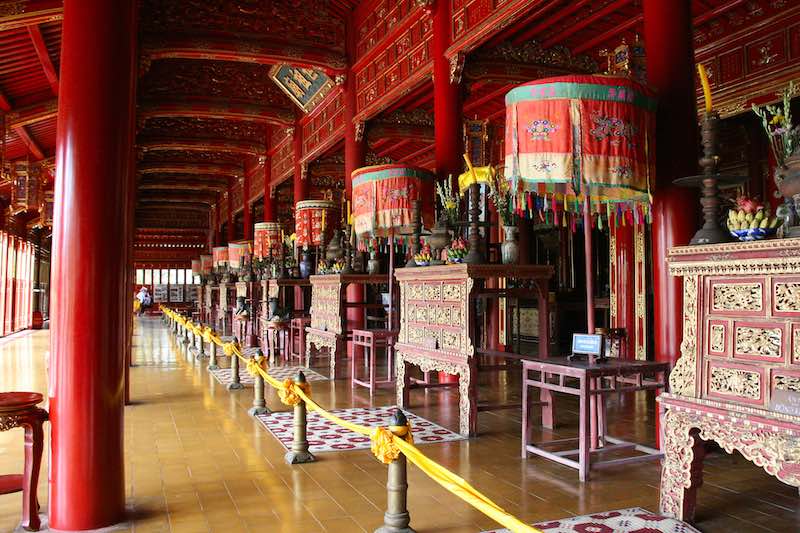 Thai Hoa Palace is one of the most important buildings of Hue Imperial City. It is the palace where the kings of Nguyen dynasty rule the kingdom for more than 100 years. The palace was built in 1805 with stunning ornaments and decorations. It is mostly ornamented with bronze and lacquer.

This grand palace houses the stunning throne of Nguyen Kings. It is not just a simple throne; in fact, it is decorated with magnificent 9-dragon gilded canopy. Since its construction, the Thai Hoa Palace has been renovated several times, especially in 1833 and 1923. 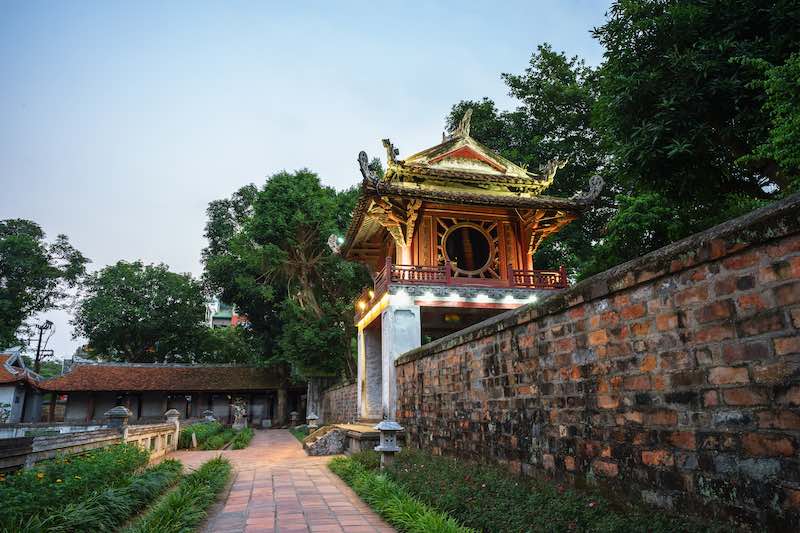 It is located on the southwest corner of Imperial City. The temple keeps the shrines of emperors of the Nguyen Dynasty. The temple was built during the Minh Mang Emperor around 1822 to 1823. This stunning building was built with the Forbidden City of China as the inspiration. Although the temple is relatively old, it is a well-preserved building. When you visit this historical site, you will be able to see a glimpse of Vietnam imperial era. 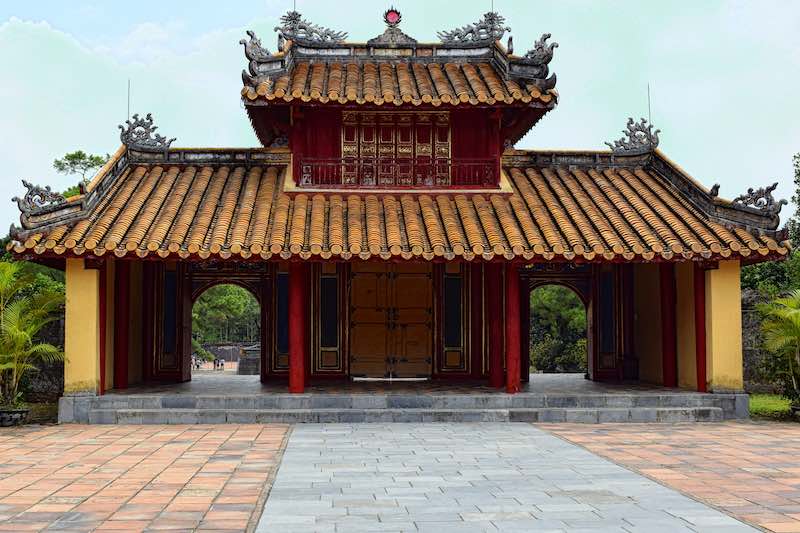 If you want to see the history of the Imperial era of Vietnam, you should place the Tomb of Gia Long into your list. It is because Gia Long is the first Nguyen emperors of Vietnam. However, despite being the first emperor, his tomb is the least popular among all emperors of the Nguyen Dynasty. One of the reasons is because of the inaccessibility, considering that it is located 25 miles outside of Hue city.

Located on the further side of Hue city, it is also because of his unpopularity, even in Vietnamese history that therefore, this tomb is almost always empty and deserted. It is also damaged because of the war and unfortunately hasn’t been restored yet. However, upon seeing this amazing site, you will see the resemblance of this tomb to other royal tombs in Hue. This is because the tomb of Gia Long is the template of all other tombs. 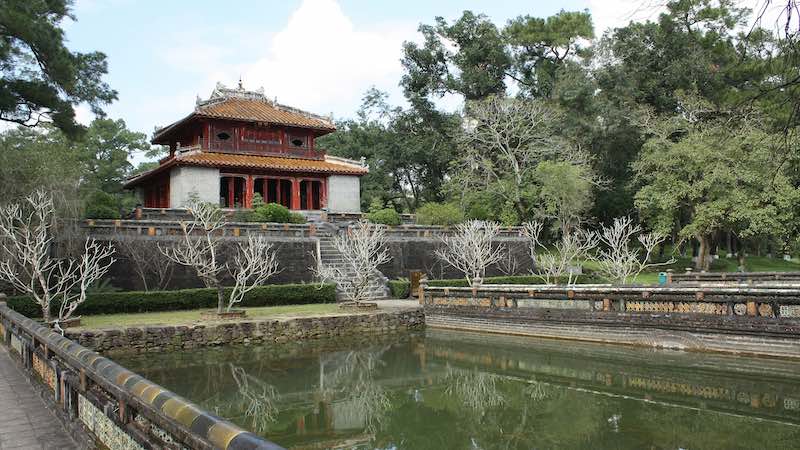 This tomb is relatively nearer to the city centre, only around 7 miles from Hue. This tomb has unique architecture and decoration, different from other tombs in Hue. The design and architecture show how traditional Minh Mang King is. It uses classical and symmetrical Chinese scheme, which is not found in other tombs.

It has a complex structure, which consists of forty structures. Within the structures, it is divided into several more rooms, such as salutation court, stele pavilion, and also the tomb. Minh Mang ordered the construction, but he died before it was even completed in 1840. His son continued the work and rested the Minh Mang King in 1843.

Who would have thought that Vietnam has interesting and amazing tourist destinations like Hue? Moreover, the relics of ancient buildings during the Nguyen Dynasty are also a special attraction that cannot be found anywhere else. That is why you will obtain a lot more value if you decided to stay in Hue hotels. You don’t have to worry about the booking since it is simple and can be done easily using booking hotels application or a website such as WorldRoamer.

Accommodation options near these activites.